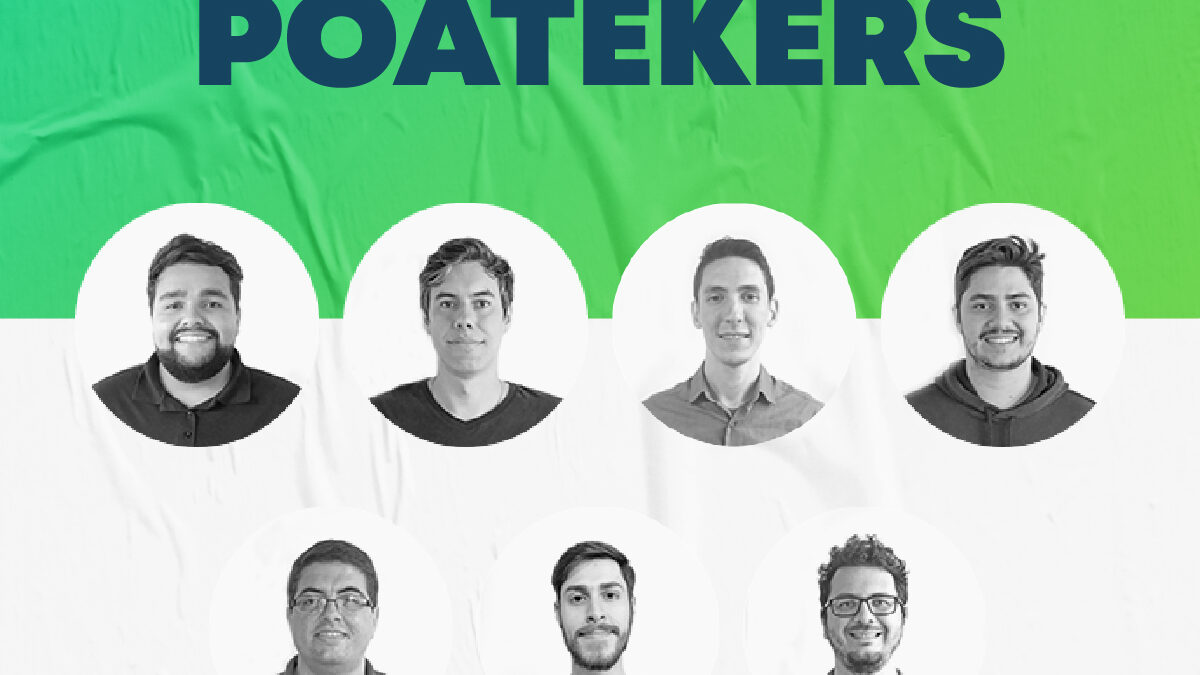 Poatek continue its growth! 7 new talents joined our team in the last month!

Bruno Moreira is our new iOS developer!  He holds a bachelor’s degree in information system from PUCRS and participanted in the first edition of the Apple Developer Academy. Bruno is co-founder of Gray Company, where he developed applications for seven years, and it was where he expanded his background in the market both as a programmer and as a manager. About his expectations and wishes for the future at Poatek, he says: “My first weeks at Poatek have been awesome, not only because of the company’s structure, but also the culture nurtured around here, where people are valued by their contributions and are encouraged to share knowledge. I’m sure I can build a brilliant future with Poatek and that together we can reach amazing results.”

Diego Pereira is also a brand-new mobile engineer! Holding a bachelor’s degree in computer science from ULBRA, Diego was part of the Apple Developer Academy and he is the co-founder of Gray company with Bruno, where he worked for seven years with iOS, Angular and Unity. At Poatek he found a welcoming environment where everyone is open to share new ideas and knowledge, taking part in projects and poatek’s decisions. He sees Poatek as a great opportunity for his professional development as a developer and he hopes to contribute to the company in other areas.

Felipe Piovezan joined our team as a software engineer. He is a technologist in industrial automation and has a bachelor’s degree in automation and control engineering from PUCRS. He’s been working as software developer for over three years and is really grateful for the opportunity to join Poatek team! He says that Poatek proposes many challenges to work with and he hopes to contribute as much as possible in each project, learn new technologies and share his knowledge with other colleagues.

Juan Colin joined our mobile engineers’ team this month! He’s currently studying computer science at Uniritter, and before coming to Poatek he was also part of Gray Company team, working as iOS developer and later becoming a partner of the company. What he likes the most at Poatek is that everyone is open to participate in important decisions, that everyone works together and is always willing to listen and help. For his experience at Poatek, he expects to contribute with good practices and agility in project development, as well as helping colleagues to grow and also learning from them.

Leandro Avila also joined our software engineer’s team. He holds a master’s degree in Informatic from the Technische Universität Kaiserslautern (Germany) and a bachelor’s degree from Federal University of Rio Grande do Sul. He has previous experiences focused on automotive embedded software engineering, and safety-critical systems modeling and analysis. In his opinion, he thinks that what sets Poatek apart is the strong focus on sharing knowledge between peers, and having initiatives such as the Knowledge Transfers (every Wednesday!) and the Research Groups are great examples of this at Poatek.

Leonardo Gubert is our new addition to our mobile engineers’ team! He holds a bachelor’s degree in Computer Science from PUCRS and participated in the first edition of Apple Developer Academy. For the past 7 years he has been a partner at Gray Company, together with Bruno, Diego and Juan, where he focused on mobile development, from iOS and Android to Unity. He says that “Poatek seems like an amazing place to work, with plenty of opportunities, potential for growth and an amazing team that made him feel very welcome since day one.” Lastly, he hopes to bring his programming and business knowledge to Poatek and even learn new skills from the team!

Vinicius Hoff joined Poatek as our new software engineer. He holds a bachelor’s degree in computer engineering from UFRGS and did an academic exchange program in Lyon, France. Vinicius started his career in technology working with electronic projects after finishing an Associate Degree in Electronics. Since then, he has mainly worked with Research and Development in embedded systems. For him, working at Poatek has been a great experience because the company has a culture of innovation and really follows it. He’s always pursued a place where he would have the autonomy to work and innovate as he has here at Poatek. He also likes that here he has the opportunity to work directly with the client and develop such good communication with them. Lastly, he told us that he appreciates that the company cares about its people and supports their professional and personal growth.